Pigmentation in simple terms means colouring. The skin disorder is basically affecting your skin colour. Melanin is nothing but pigment this is responsible for skin colouring. Special cells in the skin make melanin. Its starts affecting your melanin production when these skin cells are damaged or become unhealthy.

Book Call For One On One Talk

Pigmentation is harmless and a common skin condition, within which a particular skin area becomes darker in colour. Sometimes a small amount of pigmentation’s tends to happen on any part of the skin, which occurs and as time passes it becomes darker. In certain conditions, if this increases in numbers o spots and size and darkens the skin further, it’s called hyperpigmentation. Hyperpigmentation is not serious or harmful to health concern but concern on an aesthetic level

Where can I get the best skin pigmentation treatment in Pune, Kalyani Nagar & Magarpatta city?

If you’re unsure of where in Pune to find the best treatment for skin pigmentation, go here. In Pune, TDA is a one-stop skin care facility. located in Pune’s Kalyani Nagar and Magarpatta neighbourhoods. is a top-notch skin clinic with modern amenities and a staff of skilled dermatologists with more than 10 years of experience in Pune. Enter the daily aesthetics clinic that is closest to you.

Pigmentation simply occurs due to an increase in melanin. Melanin is nothing but a pigment that gives colour to your skin, hair and eyes. There are many factors triggering melanin production but mainly Exposure to the sun, Allergic Ructions, Hormonal changes are some common reasons.

also known as the most common cause of pigmentation. the damage caused is recurring as it’s a natural process. This usually happens due to UV-A and UV-B rays in sun speed up and produces melanin in the skin. This melanin has a capacity to absorb both UV-A and UV-B rays.

Hence you get inflammation of the skin. Initially, you won’t notice the darkening of skin but over a period of time, you can see tan patches on the skin.

an allergic reaction can be caused due to external factors or certain medications like [ retinoids, anti-seizure drugs, hormonal medications, non-steroidal drugs etc] this can also cause pigmentations to the skin.

mainly during the time menopause, are another major cause of pigmentation. excess pigmentations are also observed in women’s during pregnancy due to excess productions of progesterone and estragon in hormones.

Since pigmentation shows patches on the face neck, nose, forehead and other parts of your body. The uneven appearance of skin could be the beginning of pigmentation.

Treatment for Skin Pigmentation you will get at TDA Kalyani Nagar & Magarpatta city clinic, Pune.

Every treatment is different even if it is performed for the same issue keeping in mind the severity of pigmentation. some may need a greater number of sessions, some work on superficial skin, some may have more od dead skin layer on the skin which has a different way of removal.

For every skin type and their requirement different treatment is available at The Daily Aesthetics Clinic in Kalyni Nagar & Magarpatta city, Pune:

The cost of skin pigmentation treatment in Pune (Kalyani Nagar & Magarpatta city) varies from Rs.2000 to Rs.10000. Cost depends on factors such as 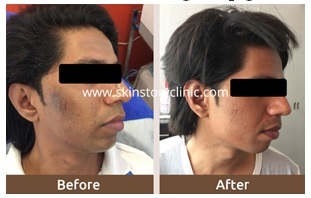 To lighten the dark skin Laser procedure is performed on the affected areas, this may include minor redness, swelling, itching for some time. Treated skin area goes red to intense and might last for few days.

Can pigmentation be removed?

Yes, it can be removed through laser treatment, which is the most advanced treatment nowadays available in skin speciality clinics which is done by skin experts. Laser treatments is best to treat pigmentation’s issues on the skin such as age spots, freckles.

How do I know I have pigmentation?

It’s usually easy to recognise discolouration and uneven skin tone, changes on our face, face cheeks. forehead and even nose can be affected if you have pigmentation.

How can I treat hyperpigmentation?

With various treatment available today in the market which is to be performed under doctors’ guidelines you can go for Chemical peels, Laser peels, IPL therapy dermabrasions and other options suiting your skin.

Safest and fastest way to get rid of pigmentation?

The best and fastest way is a laser, chemical peels, dermabrasions.

Yes, vitamin c helps you in controlling hyperpigmentation, as it has antioxidant property. It also helps in skin tone reduces wrinkles and protects you from sun damage.